Although REAPER is an incredible digital audio workstation, it does have a few drawbacks when you compare it to other DAWs. For example, it does not have any audio samples/loops/instruments; it does not have the most attractive stock plugins; it has a reasonably steep learning curve, etc.

Contents show
1 Downsides Of REAPER
2 Preface
3 REAPER Drawbacks
3.1 REAPER Does Not Include Any Audio Samples/Loops/Instruments
3.2 REAPER’s Stock Plugins Are A Bit Unattractive
3.3 Sometimes REAPER Has A Bit Less Compatibility With MIDI Devices
3.4 There Is No Designated REAPER App
3.5 REAPER Does Not Have A MIDI Drummer Feature
3.6 REAPER Has A Pretty Steep Learning Curve
3.7 REAPER Requires A Couple Free Extensions To Unlock Full Function Of The DAW
4 Drawbacks No More (REAPER Drawbacks That I Have Retracted From My List)
4.1 There Are Fewer REAPER Users
4.2 There Is A Stigma Against Using REAPER
4.3 There Is A Lack Of REAPER Tutorials
4.4 REAPER Does Not Have The Best MIDI Editor
4.5 REAPER Does Not Have The Best MIDI Quantize Function
5 Related Questions
5.1 What Are Some Of The Most Popular DAWs?
5.2 What Are Some Pros/Great Features Of REAPER?
5.3 Is REAPER Good For Producing Music Of All Genres?
6 Final Words

Before you learn a DAW, it is best to know as much about it as possible, including the not-so-good bits!

It would help if you did your due diligence when looking for music production software to save your valuable time/money.

After using REAPER for numerous years, I love it, but I have also identified some cons of the DAW.

In this article, I am going to share with you some of the main drawbacks of REAPER.

Before we dive into the drawbacks of REAPER, this article is opinion based, and some of you may disagree with what I say.

That’s totally okay! Just know that REAPER is my DAW of choice, and these drawbacks are minor personal grievances at the end of the day.

I need more than that to keep me from using and recommending REAPER to everyone in the music production community!

Also, in case you have seen my “REAPER Drawbacks” video, you will notice that this written list of REAPER downsides is different.

This is due to me changing certain opinions over time and even making peace with different REAPER functions that used to bother me.

Here is my original video: 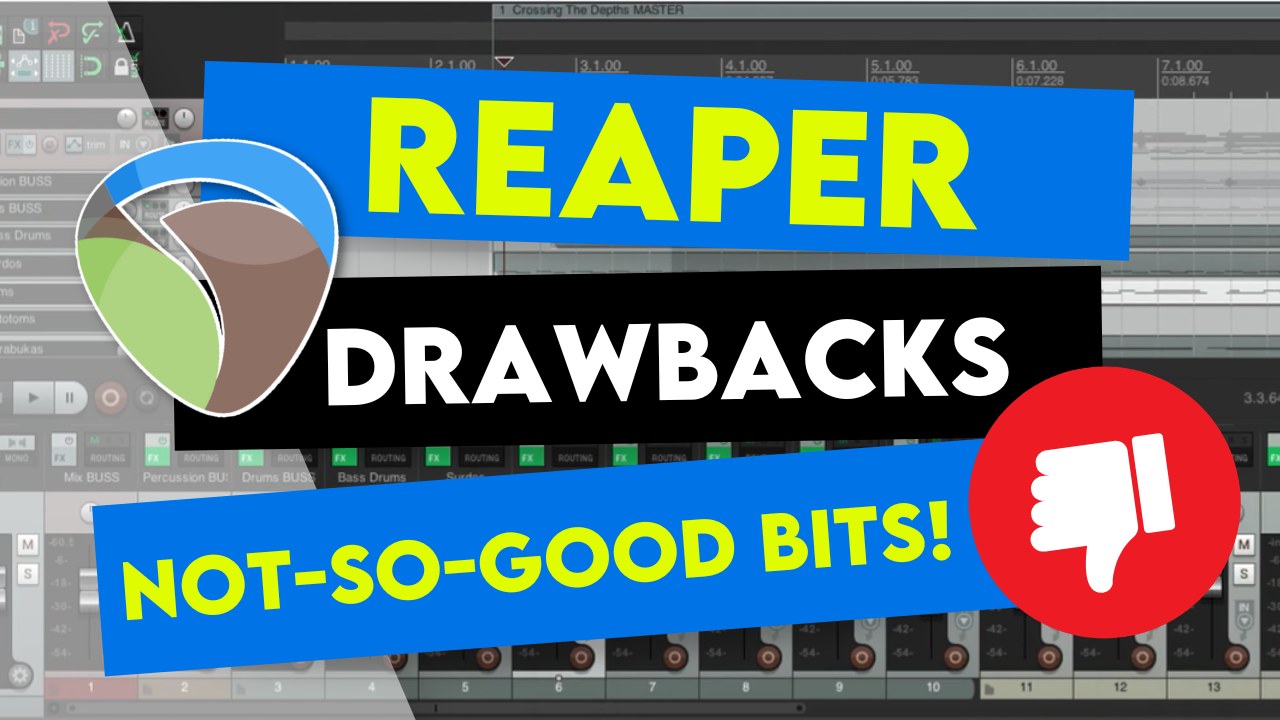 Without further delay, let’s take a look at the different drawbacks of REAPER!

REAPER Does Not Include Any Audio Samples/Loops/Instruments

The first drawback of REAPER is its lack of audio samples, loops, and virtual instruments.

While other DAWs come with extensive suites of these music production resources, REAPER does not, and it is one of the main downsides to the DAW.

Keep in mind, although it could be better, REAPER’s lack of samples and instruments is one of the reasons that it is such a low-cost digital audio workstation.

Also, it makes it so that music producers build their own library of sounds and instruments instead of relying on the tools within their DAW; this can help producers develop their own unique creative voices and sound libraries.

The next REAPER drawback I want to go over is the general ugliness of the DAW’s stock plugins.

Obviously, this is only a cosmetic issue and does not affect the software’s or its plugins’ performance. Still, it is something to take note of.

If you are constantly working on producing music, it can be nice to have some plugins that are pleasing to the eyes.

Take note, though, the simple displays within REAPER’s plugins contribute to the low processing needs of the DAW and can be an advantage for some users.

Even though REAPER’s plugins are pretty functional, and I use some of them in my mixes, they could be more attractive.

Check out this other article that will give you a more in-depth look at REAPER’s plugins.

Sometimes REAPER Has A Bit Less Compatibility With MIDI Devices

From my experience, REAPER has less compatibility with external MIDI devices than some other DAWs on the market.

What I mean by this is that I have had more trouble getting specific MIDI devices (MIDI keyboards, MIDI controllers, etc.) to communicate with REAPER than with other DAWs, Logic Pro in particular.

Keep in mind that some MIDI devices I have used in REAPER were pretty seamless to get set up. This problem only comes up with certain MIDI devices.

Although it’s something that I’m almost always able to work around and figure out, it would be nice to simply plug in any MIDI device and be able to use it right away with REAPER.

There Is No Designated REAPER App

This next REAPER drawback is something that I hope Cockos figures out soon.

Although there is still a decent web controller that you can use to control REAPER with an external device, the DAW still needs a designated controller app.

REAPER’s web interface controller is pretty handy when recording different things around the studio and wanting to avoid walking back and forth from your computer.

Still, it does have limited functionality when you compare it to Logic Pro’s app. It really only allows for basic recording and control of REAPER.

If Cockos decided to create a designated app for REAPER with increased functionality, I believe it would be a game changer for the DAW.

Here is another article that will show you all about the REAPER web interface controller and how to use it!

REAPER Does Not Have A MIDI Drummer Feature

Another REAPER drawback I want to discuss is the lack of an automated MIDI drummer that generates MIDI drum tracks like some other DAWs.

The lack of this feature makes building MIDI drum tracks in REAPER more tedious than in some other digital audio workstations.

Although this is not a massive drawback because REAPER is not the only DAW without a MIDI drummer, adding a similar feature would be a huge win for REAPER.

Something that makes REAPER a bit inaccessible for some users at first is its somewhat steep learning curve.

REAPER is a DAW that allows you to do just about anything in audio/music production and engineering, but it can be challenging.

It’s possible to start using REAPER and get the hang of the basics right away, but unlocking the full potential of the DAW can take a while due to its advanced functions.

The final REAPER drawback that I want to go over is that REAPER requires downloading a couple of extensions to unlock the DAW’s full potential.

You will need the SWS and ReaPack extensions to get the most out of REAPER.

These are free extensions, but it is irritating that you must make additional third-party downloads to use REAPER to the fullest extent.

Keep in mind it is still possible to use REAPER without these extensions, but you might eventually reach a point where you will need them to gain certain functionality.

Despite these drawbacks of REAPER, it is still an incredible music production software that I believe will only grow in popularity and improve over time.

As I mentioned earlier, I have made some changes to my list of REAPER drawbacks from the video that I previously made.

Here are my retracted REAPER drawbacks, as well as why I have removed them from my list:

There Are Fewer REAPER Users

While it may be true that there are fewer REAPER users when compared to some other DAWs, I have taken this REAPER drawback off of my list because there is still a considerable REAPER community that is only growing with time!

There Is A Stigma Against Using REAPER

The next REAPER drawback I have removed from my list is there is a stigma against producers and engineers who use it.

The fact that many other producers and I can get hired and complete paying projects using REAPER prove that there is no legitimate stigma against it among actual professionals.

While some people may judge REAPER and consider it a less-than-industry standard DAW, they need to learn what they are talking about and have clearly not seen the ways of the REAPER.

There Is A Lack Of REAPER Tutorials

Another REAPER drawback I have reconsidered is the lack of tutorials and online knowledge.

There are a ton of advanced functions within the DAW which can sometimes make it hard to find information on specific features and processes.

Still, if you look hard enough and make the most out of your resources, you can figure out how to do just about anything in REAPER.

Although REAPER has been around for a short time compared to some other DAWs, it still has a very healthy online community.

REAPER Does Not Have The Best MIDI Editor

Something else I mentioned in my original “REAPER Drawbacks” video is REAPER’s MIDI Editor not being too great.

However, after thinking this over, my only real complaint about the REAPER MIDI Editor is that it looks pretty bland.

It makes me feel like I’m filling out spreadsheets rather than working on music.

Then again, working with MIDI data is never that exciting!

While REAPER’s MIDI Editor might not have the most attractive appearance, it is still a highly-functional component within REAPER.

REAPER Does Not Have The Best MIDI Quantize Function

With this final REAPER drawback that I decided to remove from my list, I was basing my original opinion on looks again instead of function.

When you look at REAPER’s MIDI quantization feature from only a functional standpoint, it does what it needs to do quite well.

There is no need for a MIDI quantization feature to have a fancy appearance.

What Are Some Of The Most Popular DAWs?

Here is a list of some of the more popular DAWs:

Each DAW has its strengths and weaknesses, so put plenty of time and thought into which one might be best for you.

What Are Some Pros/Great Features Of REAPER?

Here are some of my favorite things about REAPER:
– It is a low-cost DAW
– It is a highly-customizable DAW from the display down to the function
– It gives you a ton of control and flexibility over your workflow
– It does not require a lot of processing power from your computer
– It is a highly-compatible DAW that you can use to work with many types of audio and video files
– It is a constantly updated DAW that is continually improving
– REAPER is an excellent digital audio workstation that allows you to do just about anything in the world of music and audio production/engineering.

Is REAPER Good For Producing Music Of All Genres?

In my opinion, REAPER is a fantastic DAW for producing music of just about any genre or style.

Although REAPER does not include audio samples, loops, or virtual instruments, you can still use it to produce any genre of music if you have your own collection of third-party resources.

REAPER is a mighty DAW with tons of advanced features that will help you produce any music you want.

Remember, there is nothing wrong with changing an opinion over time, especially if it’s based on further research, community insight, and experience.

As I have shown you, REAPER has a few drawbacks despite being an incredible DAW for many different areas within the world of music and audio production.

These drawbacks are a matter of opinion, and they might not bother some REAPER users. It all depends on the individual and their music production workflow.

There is no such thing as a perfect DAW, and REAPER is no exception, even if it is my personal DAW of choice!

Check out this head-to-head as we pit REAPER against Logic.