Most musicians will find the audio interface a much more worthwhile investment considering that the headphone amp found in one is either equally good or insignificantly worse compared to a dedicated headphone amp.

It’s hard at times to judge which gear is optimal for your recording setup. You may wonder if it’s better to buy an all-in-one device or a dedicated one.

For all serious headphone users, a question like this will eventually emerge – should I buy a dedicated headphone amp or stick with the one found in the audio interface?

This article will shed some light on this topic and help you decide which one to buy.

What’s The Difference Between an Audio Interface and a Headphone Amp?

Since both terms are intertwined and often used in conjunction with one another, you may think they’re basically the same thing. However, that’s not actually true.

An Audio Interface is a device that has multiple purposes.

First of all, it serves as a converter, meaning that it converts your analog signal (microphone or guitar signal) to a digital one that your computer can read. These 1s and 0s can then be manipulated in all sorts of ways in your DAW.

Secondly, the audio interface serves as an amplifier for your monitors and headphones. This means that almost every model (even the budget ones) has a headphone amp already built into it.

On the other hand, a dedicated headphone amp has a single purpose only – it amplifies the audio signal coming into your headphones.

The audio interface has a headphone amp already built into it is probably the reason many people mistake them for the same product. So you might wonder, what’s the value of a dedicated headphone amp? Why should I buy it over an audio interface, which frankly seems like a much better deal?

Benefits Of An Audio Interface

As we’ve discussed before, an audio interface is a multi-purpose device that gives you loads of tools for your home recording studio.

An audio interface is essentially an external sound card. The same as your regular sound card that comes integrated with your motherboard, except it’s deeply specialized and optimized for high-quality audio.

This means that your audio playback will be of higher quality and reproduced with more fidelity than the one reproduced with your regular sound card. This is an absolute must if you’re thinking about doing any serious mixing or mastering work in your home studio.

An audio interface means you can record either through your microphone or an electric guitar in high resolution. Most models offer high-quality preamps that are up for the most challenging situations.

Depending on the price range, you can expect anywhere from a single channel up to 16 or even 32 input channels.

Of course, 32 channels may be a bit overkill for most producers, so at least two input channels should cover the need of most studio tasks. Unless you want to record a whole drum kit or a whole band playing together.

Additionally, converters that turn your analog signal to digital (A/D converters) are usually excellent, and you shouldn’t lose any quality of your signal in the process.

All in all, having an audio interface is a must if you’re serious about recording anything.

Of course, they’re not ‘free’ per se. Still, alongside all of the goodies mentioned above, you also get to amplify your monitors and headphones. Pretty sweet!

Interfaces are pretty good at handling even passive monitors (ones that do not have built-in amplifiers), so you’ll have no shortage of power around them. And the fact that all of this is handled through a single USB connection makes it all the better as you’ll keep things tidy and not bother yourself with bulks of cables all over the place.

Also, each unit has phantom power that can power your condenser microphones. You’re more likely to find it labeled as 48V, though.

Latency is a phenomenon where your signal gets delayed a second or two after being initially played. This means that what you hear in monitors doesn’t reflect what’s happening in real-time.

Needles to say, this will be confusing and impossible to record with.

To combat this, an audio interface lets you change the buffer size of your system. By setting it to a minimum value (usually at around 32 samples), you’ll effectively have a latency-free signal.

Technically there’s still some latency in there, but nothing that will get in the way or even be noticeable.

Click here to check out our top pick audio interface.

Benefits Of A Headphone Amp

A headphone amp has a single purpose – boost the volume of the signal coming into the headphones. This might seem like a trivial thing; however, there’s more to it than meets the eye. 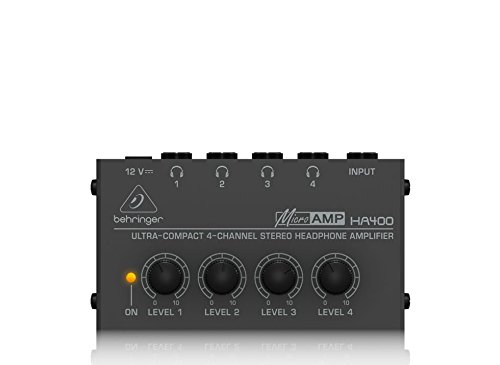 So, What’s The Thing About Headphone Amps?

An amp with a low power output won’t properly drive the high-impedance headphones. You may experience audio dropouts, weird frequency responses, and even a distorted signal from your otherwise perfectly functional headphones.

This is why having a dedicated headphone amp is crucial if headphones are your thing.

Although this is not strictly a feature of dedicated headphone amps, most models have multiple headphone outputs instead of a single output found on most interfaces.

This means that you can connect multiple headphones simultaneously and monitor your mixes with greater accuracy.

Another great benefit of headphone amps is in the studio environment.

Not being loaded with any fancy gadgets means that you can find a reasonably cheap headphone amp with multiple outputs. Having at least eight headphone outputs is crucial when a couple of musicians record live in a single room.

People often resort to line inputs for instruments like electric guitar or keyboard to prevent bleed from each instrument coming into everyone’s channel.

However, this means that you’ll have to make a separate mix for each band member depending on what they play and how far from other members they are placed in the room.

A dedicated headphone amp will have a volume knob for each channel so every musician can dial in just the right amount of signal specific to their role in the band.

Click here to check out a budget-friendly headphone amp.

How Good Are Audio Interfaces Compared To Headphone Amps?

Audio interfaces are built with practicality in mind. They try to pack as many features into a single box without sacrificing too much quality. ”Too much” is the keyword here- after all, there has to be some reduction in quality for the whole thing to be as affordable as it is.

There are a couple of factors we need to consider.

First of all, there’s the price range. If we take the same price range for each product, a dedicated headphone amp will give you almost the same sound quality as an interface. The amp might do better on paper, but it’s debatable whether you’ll actually be able to notice it in a blind test.

Having said that, there are high-end interfaces that sound better than a cheap mic amp and vice versa. It’s all about how far up the price range you’re willing to go.

The second important factor is whether or not you need that slight difference in sound improvement. If you’re only concerned with the recording, you can probably live with yourself knowing that your headphones work at 99% or 95% of their total capacity.

I can understand that people want that 1 or 5% difference for more serious music production. However, I think that you can absolutely do without it.

All in all, headphone amps found in audio interfaces should generally cover most of your needs. Unless you want that 5% increase in performance (if we’re being optimistic), an audio interface should be good enough.

Can The Two Be Used Together?

You can use a separate headphone amp together with your audio interface.

To connect them, you’ll need a 1/4″ TRS or RCA cable that goes from your audio interface’s headphone output to a dedicated headphone amp’s input.

You may want to do this for a couple of reasons.

You get the best of both worlds – functionality and practicality of an audio interface coupled with the best possible headphone sound from the amp.

Also, you may want to take advantage of multiple headphone outputs while still being in your main system (with the audio interface being the brain that ties all your gear together).

And finally, you might have high-impedance headphones that just don’t work as well coupled with your audio interface.

Do You Need a Headphone Amplifier if You Have an Audio Interface?

Unless headphone impedance is an issue, an audio interface is just as good as any dedicated headphone amp, so you don’t need to spend additional money on an amp.

Do You Need an Audio Interface Even if You Have an Amp?

An amp is only suitable for you if you’re not a recording musician. Unfortunately, an amp doesn’t have mic preamps and input channels to plug a microphone in. This means that if you want to record anything, you’ll need an audio interface.

What Is the Purpose of A Gain switch on A Headphone Amp?

The gain switch serves as a volume control for your headphones.

Does the Audio Interface Affect the Sound Quality of Amp Sims?

Yes, the better the mic preamps and converters, the better the signal, and your amp sims should work better. Also, interfaces with a Hi-Z switch perform significantly better than those that miss that feature.

Do You Need a Mic Preamp if You Have an Audio Interface with A Preamp?

Most probably, you don’t need it. Sure, some high-end preamps have a specific color and sound a bit nicer. Still, in my opinion, the price difference doesn’t justify the benefit.

What Are the Key Features to Consider when Selecting Audio Interfaces?

Audio Interface Vs guitar Amplifier Which One to Choose?

The audio interface will surely give you more options to craft your sound. Considering how many amps sims are out there (even the free ones that sound amazing), it’s tempting to say that digital is the way to go. However, there’s a unique charm in plugging in a real guitar amplifier and feeling it vibrate through the room. It’s all up to what kind of guitar player you are and what you prefer.

While it’s true that a dedicated studio headphones amp may slightly outperform an audio interface in the same price range, most musicians will find the audio interface to be a much more practical and worthy investment.

Any advantages you get from the headphone amp are highly debatable and ultimately won’t be of much significance for most people, especially since audio interfaces do a pretty good job at that already.

Want to learn more? Check out our Audio Interface vs Phantom Power guide.