In this video by Servida Music, three different producers are given an acapella to use in a song they are producing.

We have a beginner producer (a.k.a, the noob), an intermediate producer, and a professional producer.

They each have thirty minutes to create the track.

The first producer creates a trap-beat-style song, which I’d expect, as you can make trap beats sound pretty good with limited experience. This made me hopeful that the track would be good, which raised the bar even higher for the professional producer.

He has gone for the typical hi-hat sound you would expect in a trap beat, with a simple but effective rhythm.

The more exciting part is that he has yet to use a drum rack in Ableton to program the hi-hat rhythm. He has put it into a sampler and has used different pitches and velocities for the extra hi-hat parts on top of the continuous hi-hat.

This is something I wouldn’t have expected from someone at his level.

We have a simple keys sound, with a typical keys sound associated with a trap-style beat. However, rather than having just chords, there are notes in-between the chords, creating almost a counter melody. This makes it way more interesting than just chords.

I am pleasantly surprised at his creativity, considering his experience.

Ironically he says that he doesn’t know music theory. Still, it seems more like he can’t apply it to playing on a keyboard yet, but the parts for the keys and other sounds clearly show he understands it.

The bass sound is an analog bass virtual instrument for the softer parts. This plugin was influenced by a Moog bass sound and is a tremendous classic-sounding bass that blends with the keys and vocals very well.

The only part I didn’t like about this was that the bass notes were being cut off early, leaving a gap between the notes. In trap, this is common, but usually during parts where the beat is. When it’s for these softer parts, I found the cut-off of the note distracting.

With this, if you want not to have the bass notes complete, maybe automate the volume down for that part and then automate it up. So it fades in and out rather than stops and starts. This would also work well in this section of the track, providing an almost swelling feeling.

Of course, when the beat kicks in, we have a good pairing of a kick sample and an 808 bass. Classic trap sounds bring the song into that familiar hard-hitting territory we have come to expect with a trap beat.

I also noticed some extra vocal chops in there, just sprinkled in. I’m unsure if that’s from the original acapella or something else. Still, it adds a nice layer above the rhythmic and harmonic components of the track.

To finish it off, we have the classic choppy snare sound as the main snare. Then there are a couple of extra different choppy snares, which I love doing to add other rhythms in without taking away from the main beat.

Maybe now that you’ve made your beat, you’re wondering what to do next. Don’t worry; our article on whether you can upload beats to Spotify has you covered.

The first thing I notice is that the vocal sample is chopped up, which gives me the impression that he is making the vocals fit the idea he has in his head. This is rather than making a beat to the vocals, which is what the beginner producer did.

Both are great ways to write songs, one isn’t better than the other, but it is something a more experienced producer would lean towards.

I’m not sure of the exact style this producer is going for, as there are a lot of borrowed sounds from genres, but it’s definitely in the dance/pop realm. But I do love it when music incorporates other elements from genres to create a unique sound.

An excellent analog bass sound is more prominent before the drums kick in. It’s being played rather staccato and has some exciting fills for an otherwise light verse. It then doubles up with 808s when the drums come in.

This is a standard aspect of music production, to thicken the bass sound in a chorus or more significant part. In the sparser parts of the song, the bass doesn’t need that extra texture so you can lift the energy of the music with another bass sound in the chorus.

When the drums are in, and the song is in its hook, the bass is choppy and lines up with the kick drum. This is something borrowed from hip-hop and creates this tight rhythm section and low end.

The beat has a natural bounce by utilizing offbeat open hi-hat sounds and extra percussion. The kick drum sounds like a door knock that’s been filtered, which is a typical sample to use on a 90s hip-hop track. Then the snare is a clap that goes more into the dance and disco realm.

Are you looking to leap from an intermediate producer to a professional one? Then it would be best to read our article on whether producers get songwriting credits.

With the final producer, we have a dancehall track. One thing I am enjoying about this video is that each producer has made a track in different styles and genres. It’s so interesting to see this one acapella be interpreted in different ways.

The drum beat is exactly what you’d expect from a dancehall song. We have a four-on-the-floor kick pattern, with a sharp yet thick kick sample paired with a breath-like snare sample (which I assume has been filtered to remove some top end).

This creates different rhythms within the track, which adds extra bounce to a production.

For the drop, we have a vocal chop melody. This is where you find vocal sounds you like in the sample and cut out the parts you don’t want. Then arrange these samples, and pitch them to create a brand-new melody.

Using vocal chops instead of synths is a great way to create a unique sound. Everyone’s voice is so different, so even using your own and then altering it could be a way to make your music sound more original.

I was excited to see that the professional producer pulled out his guitar, being a guitarist myself. There is always this notion that the guitar is dead, but the average person doesn’t realize how much guitar is still in every genre.

He uses an acoustic guitar to provide a nice finger-picking part for the verse. It sounds excellent, and adding that organic sound into an otherwise electronic production is my favorite way to produce electronic music.

The guitar also goes through a filter to remove some top end, leaving loads of room in the mix for the vocal parts.

One thing that separated this track from the others was the extra sounds that weren’t necessarily the main parts. All of the risers, impacts, and other ear candy sounds. Things may only appear once but are crucial in providing a different atmosphere.

It’s also a fantastic way to build and release tension within the song, giving a more robust emotional response. Also, right before the main drop, after the verse, it builds to the drop, and you hear the vocal chop melody. When it finally kicks in, it’s that much more prominent in context.

A great technique to use for sure.

Overall, I am very impressed by each track. More so, the beginner’s track, if I am honest. It’s not necessarily the best track, but for someone that’s been producing for only one year, his skill level was far more than I expected.

While I enjoyed the beginning and professional tracks, the intermediate track was the song that did it for me. Incorporating different sounds and elements from other genres was great, and I prefer that style over the other two.

However, I would have liked to have seen the intermediate producer use some of the risers, impacts, and ear candy techniques that the professional producer used. That would take this song up a level.

You can check out the full video here: 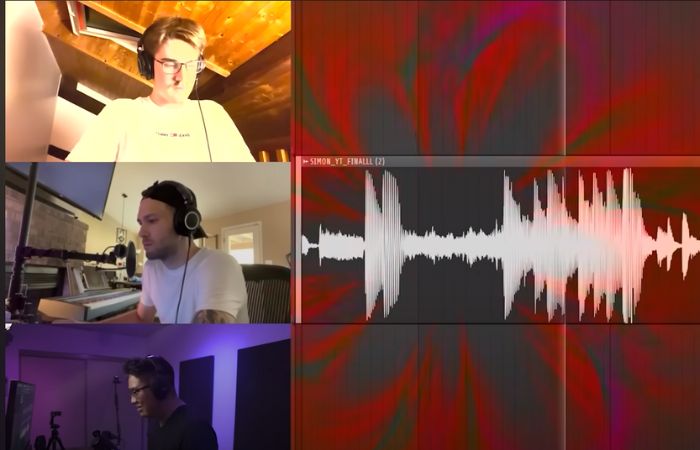 You may be in the market for a DAW if you’re new to producing. My DAW of choice is Ableton, and I couldn’t recommend it higher. There are different levels of buying Ableton, which can get confusing.

Check out our article on whether Ableton Suite is worth it to decide which level you want.