Considering how the introduction of USB technology made MIDI connection so much easier unless you own a very old MIDI controller that doesn’t support USB, there would be no reason to buy a MIDI interface over an audio interface.

Modern technology brings musicians worldwide an immense value in terms of possibilities and information. However, too much info can be stifling instead of motivating.

If you are a beginner musician who just got into the recording world, you have more than likely been faced with numerous new gadgets and terminology.

Articles like these tend to demystify topics you may find hard to understand in the easiest way possible. We’ll go through all the potential misunderstandings you may have – we’ll explore audio and MIDI interfaces, how they work, and which one is a better choice for your particular needs.

Let’s start with the basics.

What Is An Audio Interface?

An audio interface is a multi-purpose device designed to cover most of the tools a musician may need in his home studio.

An audio interface is designed explicitly with having the highest quality of audio reproduction in mind. This means that any audio that passes through the audio interface will be clearer, more pristine, and less interference and noise than the integrated sound card.

Secondly, you get the option of recording either with a microphone or by plugging an electric instrument directly into the interface.

Additionally, an audio interface can serve as an amplifier for your headphones and studio monitors. Some models even have the option of connecting two or even three pairs of speakers simultaneously.

This is a great help when mixing music, and you want to hear how your song translates to other speakers.

And lastly, some audio interfaces have MIDI support. This means connecting any MIDI device with an appropriate MIDI cable. Bear in mind that a single MIDI cable can either send or receive a MIDI signal. This means you’ll need two cables, one to send MIDI data and one to receive it.

Click here to check out our top pick audio interface.

Midi interface is a device that lets you connect your MIDI devices to your computer.

Every MIDI device needs to communicate with the software to work correctly. Hence, the MIDI interface lets you send MIDI data to and from your computer. 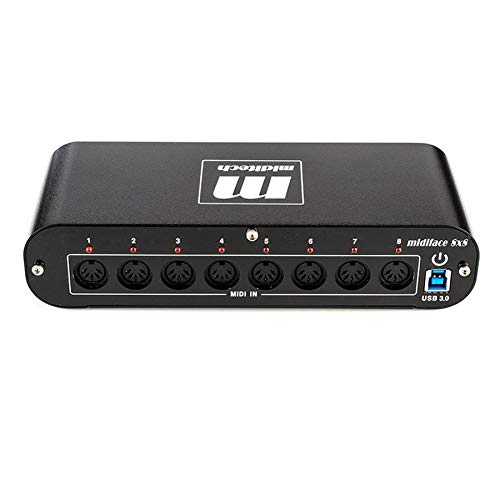 Depending on the model, you can find interfaces with multiple inputs and outputs or even a single one.

Nowadays, most MIDI controllers can be plugged straight into your computer with a USB cable. This renders MIDI interfaces kind of useless, although you may not want to overload your USB ports and still opt for the MIDI interface if you have several control surfaces, sound modules, and keyboards.

Click here to check out an excellent 4×4 MIDI Interface.

What Are The Difference Between An Audio Interface And A MIDI Interface?

An Audio Interface is a device primarily focused on working with audio. This means that you can play audio from your computer and record it.

Many audio interfaces also have MIDI support. It’s usually a single input and output, but some pricier models will let you connect multiple MIDI devices.

On the other hand, a MIDI interface is meant to operate in the MIDI domain only. It is not possible to record or play audio through it. This is the most significant difference between the two devices.

Should You Buy A MIDI Interface?

MIDI interfaces are a bit outdated technology, so the big question is whether or not it is still relevant today.

The reason it became outdated is the introduction of USB MIDI devices. Each relatively new model of a MIDI keyboard supports a USB connection, so the need for a MIDI interface has drastically been reduced in the last decade.

USB devices have made everyone’s lives easier thanks to the plug-and-play way of operating. You basically unpack the device, plug it in, wait a minute while the driver gets automatically installed, and you’re good to go.

Contrast this with finding the proper MIDI cable, getting the MIDI interface to work, and routing several wires in the correct order. You get the idea of why it became obsolete to own one.

The only reason why getting a MIDI interface would be justified is if you have loads of old MIDI devices that you’d love to use that don’t support a USB connection.

Some people prefer using the gear they’ve grown accustomed to. In such a case, it would make sense to go for an affordable MIDI interface that will let you connect four or more devices simultaneously on a single MIDI out.

Having said that, if you’re only using a single MIDI controller like a control surface or a MIDi keyboard, the MIDI interface will be of little to no use.

Benefits Of An Audio Interface

There are many benefits you’ll get by using an audio interface. These include:

Anything you play from your computer will be of higher quality and reproduced with more fidelity compared to your regular sound card. This is an essential asset if you’re planning on getting serious with your music production.

Even the budget versions of audio interfaces are loaded with components that will bring your recordings to a new level.

Having good preamps and converters is essential for getting a low noise floor and good recording signal. Depending on the model and the price range, you can expect anything from a single input preamp to 8, 16, or even 32 inputs.

In most cases, you’ll only ever need one or two inputs. The only exception would be recording drums, in which case you’ll need at least four preamps.

Additionally, you’ll lose no signal quality in the analog to digital conversion, thanks to good quality converters.

All in all, an audio interface will be an integral part of your studio setup if you’re planning on recording anything.

An Audio Interface Can Serve As An Amplifier

One of the great benefits of an audio interface is that you can power your monitors and headphones through a single USB connection. This not only keeps things tidy and reduces the number of cables lying around the studio, but it also saves you from having to buy a separate amp to power your passive monitor speakers and headphones.

Many models even have multiple monitor outputs to connect multiple speakers and check your mixes on different speakers.

On top of all this, each unit has phantom power that can power your condenser microphones.

Can Audio Interface Be Used As A MIDI Interface?

Not all audio interfaces support MIDI connections, but many do. They usually cost a tiny bit more, but they’re well worth it if you want to use your old MIDI keyboard that can only be connected via MIDI cable.

However, past a specific price point, you may want to reconsider going for a MIDI interface instead if you really need five-pin MIDI inputs. Getting an audio interface with 4 MIDi inputs or more will probably mean that you’re looking at a higher price range unit, and that may not be the best option if you’re interested mainly in MIDI.

What Is the Difference Between an Audio Interface and A MIDI Interface?

The most significant difference is that an audio interface can support MIDI while a MIDI interface does not support audio.

What Is the Difference Between Audio Files and MIDI Files?

Audio files are “set in stone,” so to speak, meaning that whatever’s in there can’t be changed without dramatically impacting the quality. On the other hand, MIDI files are flexible in a way that lets you change any parameter (pitch, length, etc.) without any loss of quality.

What Is the Difference Between a MIDI Controller and A Keyboard?

The term “MIDI controller” loosely aims to define any MIDI device. A MIDI keyboard is essentially a MIDI controller designed to make it easier for piano players to play virtual instruments.

Can a USB Audio Interface and MIDI Keyboard Work Together?

They certainly can. You can connect the MIDI keyboard via MIDI cable to the interface or use it independently via USB cable.

What Types of Devices Use MIDI Other than Keyboards?

There are numerous MIDI devices out there. DAW control surfaces, drum pads, and MIDI faders are only a couple of them.

How Do You Choose an Audio Interface for Music Production?

There are a couple of things to consider. Anything from the number of inputs and outputs to the number of external devices you’ll need will play a role in deciding which audio interface to get.

Click here for our picks of the best audio interfaces.

What Do You Need to Connect a MIDI Keyboard to A Computer?

If your MIDI keyboard is a USB one, simply plugging it into a USB port on your PC will be sufficient. Otherwise, you’ll need two five-pin MIDI cables and either an audio interface or a MIDI interface.

Learn more about interfaces with our Audio Interface vs DAC comparison.